We leave Juneau early morning on May 26. Instead of heading straight south down Stephens Passage to Five Finger Lighthouse, we pass NW around the tip 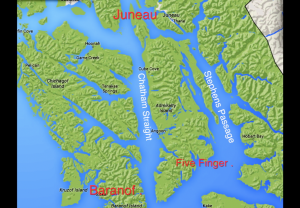 of Admiralty Island and down Chatham (chat-em) Straight. It gets a little lumpy for a while and we are glad to have done a secure tie down of our gear on deck. Once we we get past the water coming in with a long fetch from the west, it calms down.

We plan to stop by the new Coastal Research and Education Center which is being started up by the Alaska Whale Foundation  in the town of Baranof Warm Springs. We will be dropping off supplies, including some bat monitoring gear that AWF will be setting up on behalf of the Alaska Dept. of Fish and Game. We are also picking up our hydrophone to bring to Five Finger Lighthouse.

Here is a little rough cut footage (not much editing, no narration or music) from just before our arrival at Baranof until we land at dock.

Baranof is a small community in beautiful little Warm Springs Bay that faces east. It’s pretty laid back now but at one time it had two stores, a couple bars and apparently one of the finest bordellos anywhere in Alaska with some very exquisite ladies. Before white men came around, the native Tlingits (Kling-kets) from Angoon would come to the hot springs located above the falls next to the river. Today, that mineral water is piped down to some public-use, private tubs that overlook the bay.

CREC, the research center, is located in the former store in Baranof and we have been invited to help ourselves to a large supply of food that is well past the expiration date. As we cannot readily resupply ourselves at the lighthouse, we welcome any additional food sources.

CREC will be actively involved this summer with several scientific studies being conducted by post graduate students from around North America.

The next morning we depart for Five Finger Lighthouse. We want to get there near the high tide so that off-loading near the lighthouse building will be easier. Unfortunately there is a swell and wind coming from the north and the closer we get to the lighthouse, the more it becomes apparent that we won’t be able to put our substantial pile of gear onshore until it calms down. The next high tide wont be until 9:30 in the evening. Kelsey has to be to work in the morning back in Juneau so this is an unfortunate turn of events. If the water doesn’t lay down by then, she and Miles will be forced to spend the night in the boat and offload the next morning. 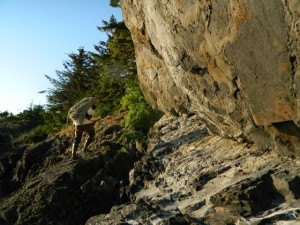 Fred and I get  dropped off on the West side of the island and work our way up through the property to open up the lighthouse building and prepare the crane to offload gear at the next high tide. Miles and Kelsey take the Connie K to the south end of the island to sit in the lee. Miles is concerned that the water won’t calm down for the evening high tide and decides to set the Connie K in shallow 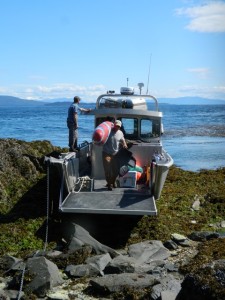 water as the tide recedes around her and offload the gear at the south end of the island. Then when the tide comes back up they will float off of the shallows and be on their way. 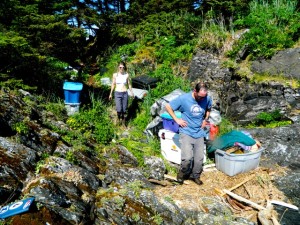 It’s a ton of gear. It will take us two weeks at five to ten loads a day each to get it all moved up to the north end of the island where the lighthouse is.