It was a busy summer at Five Finger Lighthouse. The keepers, John and Pat Gans, arrived on May 12th and stayed into September. They worked hard on the never-ending repairs and upkeep that the lighthouse demands: repairing roofs, plastering and painting, fixing leaks, trouble shooting electrical problems, etc. They brought with them their extensive knowledge of marine systems, love of the outdoors and hard work ethic. One regular visitor to the light said the place looked as good as he had seen it in 30 years.

Hundreds of visitors toured Five Finger Lighthouse this summer, learning about its role in Alaskan history and taking in the view from the tower. The lighthouse is becoming a favorite stop for many of the small to medium sized charter vessels that tour around southeast Alaska. New interpretive signs placed strategically at various locations helped educate them about the local flora and fauna.

The light station had no regular supply runs this year so the keepers were relying on the goodwill of local fishing, whale watching and small cruise vessels for delivery of stores and much needed hardware supplies. The friendly assistance from members of local communities, such as Petersburg, was very much appreciated.

At the end of the summer, local fisherman, Jeff Erickson, 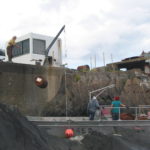 arrived at the light with a helper, Daniel, to facilitate removal of years of accumulated refuse.  As the vessel pulled away, filled to the gunnels with rusty barrels, plastic recycling, old metal trailer parts, and much more, a load was literally lifted from the shoulders of Five Finger Lighthouse. The eye sore which had long disrupted the tiny island’s beautiful berry brambled and lichen draped spruce forest, meadow of fireweed and 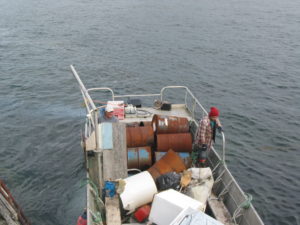 columbine, and rocky shoreline was finally gone. The city of Petersburg stepped up at the other end of the dump run to give Five Finger Lighthouse a break on disposal fees.

Thank you to these friends of Five Finger Lighthouse: Jeff Erickson, Don Holmes, Captain and crew of Northern Song, Misty Fjord, Island Spirit, Alaska Quest, Reel King, Scott Hursey m/v Pelican, Scott Roberge m/v Tongass Gem, Marine Exchange of AK, Saskia Pothof, Ismael Valesquez, Petersburg Public radio, Terri and the drivers of Hammer and Wikan and the US Coast Guard. Also to the town of Petersburg for making the keepers feel welcome and to the many other boats who visited, bearing gifts or passengers or goodwill. It was a great season and could not have been done without you!