Thomas Cumps– President and board member since 2018

Thomas resides in Petersburg with his family, wife Alice and sons Julian and Rik. Thomas grew up in Belgium and after graduating from college, moved to Colorado in 1994 to work as a physical therapist. He has been working in the seafood industry in Petersburg since 1999 and owns and runs Northern Lights Smokeries. His love for the outdoors combined with his interest for history made it an easy decision to get involved with the preservation of Five Finger Lighthouse. “It truly is a very special place on its tiny island. Each visit is a magical experience and it’s always hard to leave. I look forward to helping the board of Five Finger Lighthouse Society grow and generate many new productive members here in Petersburg and elsewhere. I can’t wait to go back when the weather allows and tackle the next project” 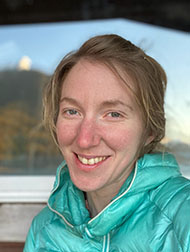 Stephanie, while not a native to Alaska, has spent her life and career trying to move up to the ‘last frontier’ ever since her first visit to Southeast Alaska. An outdoor enthusiast as well as a marine biologist and temperate rainforest ecologist with the University of Alaska, Stephanie finally made the permanent move over five years ago. “The wilderness, grandeur, and rich history is not something the soul can easily forget.” Stephanie hopes to bring her public education and natural history experience to the lighthouse, “Five Finger Lighthouse is where human history and the magnificence of nature mix in a perfect example of the rugged endurance of Alaska, and so many don’t realize the gem that is here!”. It is with gratitude to be a part of such a fun and important project that Stephanie serves on the board to protect and revitalize the historic landmark. 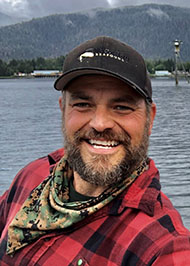 Eric has lived in Petersburg since 2009 working for the Forest Service in fisheries management. He was born and raised in a small mountain town near Lake Tahoe, California and has always been enamored with evergreen forests, bedrock shores, and crisp blue waters. Southeast Alaska has that in spades, and the location of the lighthouse epitomizes his personal utopia. “I was thankfully introduced to Five Finger Lighthouse by Thomas Cumps, who had for months been cajoling me to participate in a routine maintenance mission to the island. I left that magical spot with a stirring desire to help, in small part, brighten the future of this historic lighthouse.” 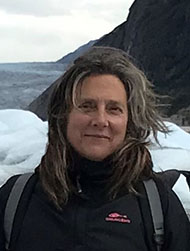 Karen is an ecologist living and working in SE Alaska for 35 years. She has a keen interest in the unique natural history of the lighthouse island environment and the historical and present human use of the lighthouse. She joined the board to help build partnerships that enhance and preserve the special features of the lighthouse for the nearby communities and mariners.

Paul Johnsen retired to Petersburg in 2007 after a long career as a marine engineer.  Originally from New York state, Paul graduated from the US Merchant Marine Academy at Kings Point, New York with two things:  a dual degree (deck and engine) and a burning desire to leave New York.  Paul worked all over the world both on board ships and ashore as a ship superintendent and a port engineer living in Georgia, Florida, Taiwan, and the Philippines.  In 1997, he moved to Southeast Alaska for good, serving with the AMHS again for ten more years as Juneau port engineer and a vessel chief engineer. Paul will draw on his reservoir of engineering experience to address Five Finger Lighthouse electrical and mechanical issues.  “The lighthouse is an exceptionally beautiful place, and I enjoy nature very much.  I just think it’s improved (and made more accessible) by the hum of well-functioning machinery.”

Jeff Erickson– board member since 2016

Jeff is a forty year resident of Petersburg, Alaska. He grew up in Washington and worked at a cannery for eleven years before becoming a full-time fisherman. Over the years he has enjoyed many visits to the lighthouse with friends and family. He is highly motivated to preserve and maintain the lighthouse infrastructure and the lovely island on which it stands so others can come and enjoy this magical place. With his 59′ seiner, 32′ open skiff and other craft, he is well equipped for supporting work parties and moving equipment on and off the island. “The first thing I do every day when I wake up is check the weather at Five Finger Lighthouse”.